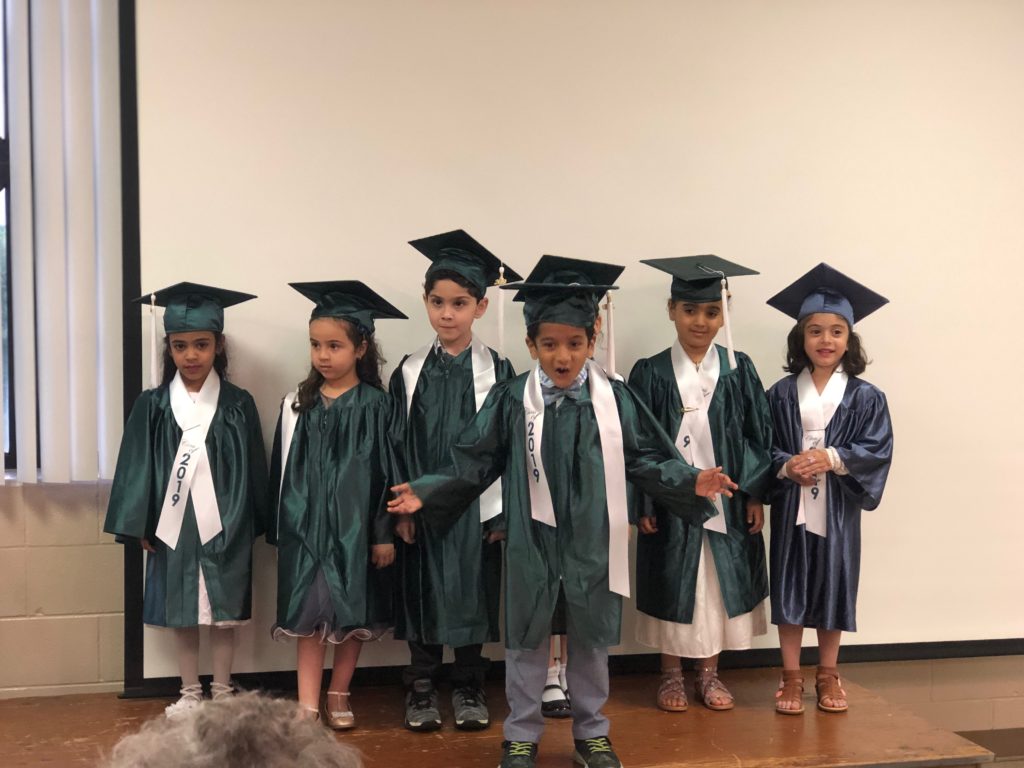 The school has moved quickly to establish a strong academic program where children are challenged to learn and excel academically. Amy Rahal-Shelton has been teaching at the Islamic School of Greater Toledo since 2004. She holds a bachelor’s degree in Psychology and will begin graduate studies in Special Education in Fall 2020. Amy is married to David M. Shelton, current ICGT council member, and is the daughter of the late Ollie Rahal and Sofia Borabe Rahal. She is the mother to David and Sofia, both engineering students at the University of Toledo, as well as ISGT and ICGT Weekend School alums.

Amy’s roots go back to the original Islamic Center on Bancroft Street in Toledo where her great-grandfather, Ali Rahal, was one of the founders. Her deep commitment to the success of the center and the school stems from her belief and pride in the mission of both.

Miss Amy, as she is known to her students, has a passion for preschoolers and identifies her classroom goals as character and social skills development, as well as academic preparedness. She believes success lies in creating an inclusive classroom community based on respect and kindness while fostering an Islamic identity

Tom and his wife Aimee (Adray) are the parents of current ISGT student, Samira. Tom is currently the principal of Byrndale Elementary School in Toledo. He has over 20 years in education, serving as a teacher, counselor, and high school principal. Tom has a B.A. in Psychology from the University of Buffalo, M.S. in Counseling from Canisius College, and Ed.D. in Educational Administration from San Francisco State University.

Erin is an Environmental Engineer who provided 18 years of service at the Enivironmental Protection Agency, in the Divsion of Air Pollution and Control. Erin has recently left the agency to spend more time with her three children who are all former ISGT attendees and to pursue her other passion in wildlife rehabilitation. Erin also enjoys being able to support and volunteer more during ISGT fundraising events.

Naveed Ahmed is the President of the Foundation and a long-standing member of The Islamic Center of Greater Toledo. He has served on its governing Council for more than 20 years, chairing many committees including Religion and Education, Maintenance, Youth, and Publication. Currently, he serves on the ICGT Board of Trustees and also is on the leadership Committee that operates the Islamic Food Bank of Toledo. Mr. Ahmed retired from the Anderson’s in 2016 after 41 years, serving in many leadership positions in Operations and Business Development. He and his wife, Rehana, are active members of the ICGT. They have two boys, Nadeem and Noor and two grandchildren, Kiran and Noorah.

Nadia Ashraf-Moghal is the current Vice-President of the ICGT Council and served as President of the ICGT, for the last four years . She has been on the school board since 2016. Nadia was born and raised in Toledo, Ohio. She attended the University of Toledo and the University of Toledo College of Medicine where she attained her Doctor of Medicine degree. She went on to complete her residency in emergency medicine at St. Vincent Mercy Medical Center and currently practices emergency medicine at St. Luke’s Hospital in Maumee. She is married to Nadeem Moghal, who is an interventional Pain Management specialist in Toledo. They have two children, Raza and Zakaria. Nadia is the daughter of the late Mohammed Asad and Ismat Ashraf. She grew up attending the Islamic Center with her family and now is glad she can do the same with her children.

Ahmad Taouil was born and raised in the Toledo area and has been an active member of the Islamic Center all his life. He is the President of the Islamic Center of Greater Toledo. For the first 3 years on Council, Ahmad chaired the International Festival and had the three most successful years on record. For the next 4 years on Council he served as Vice President and was Chair of the International Festival. He is active on multiple committees and has volunteered on countless projects involving the Islamic Food bank.

Ahmad is married to Malak Taouil and has three children, Adam, Leah, and Sophia who currently attend the Al-Nour Weekend School. Ahmad graduated from the University of Toledo with a Bachelor’s degree in Biology. However, he decided to continue his career in the business field and currently owns and operates four furniture stores as well as multiple properties in the Toledo area.

When he isn’t working or volunteering at the Islamic Center, Ahmad spends his time with his family attending his son’s and daughter’s soccer games and practices. Ahmad is a proud member of the large Tawil family that are devoted and active members of the Center.

Ahmad hopes to continue to bring new initiatives to the Islamic Center and make it an important part of the lives of the generation he grew up with. His main goal this year is to continue to increase the relevance of the ICGT in both the Muslim and Non-Muslim communities in the area.

Najwa holds a BA from the University of Toledo and has taught ESL. She has served on Council for the 5 years and is currently the chair of the Public Relations Committee. Najwa is of Palestinian descent, having been born in Lebanon and moved to Toledo when she was 10 years old. Najwa is married to Ahmad Badawi and has 2 adult children, Reem and Omar.